Many groups are involved in sharing information on container management and other related topics, and NTT is also contributing. We report here on these groups and the issues they are working on.

In cooperation with NTT SIC and together with NTT Group engineers, we have been holding container study groups since October 2015 as a forum for studying container techniques and exchanging opinions. These study groups have been sharing knowledge and operational know-how on Docker, Kubernetes, Apache Mesos, and other tools released as OSS, as well as reports from participants of conferences such as DockerCon and KubeCon. However, a somewhat broader range of technologies and knowledge going beyond containers will be needed in the future, so the name of this group was changed to the cloud-native*5 study group as of the sixth meeting. The stated purpose of this study group is as follows: “The cloud-native study group will share information and hold problem consultations with NTT Group engineers involved in cloud computing and will accumulate cloud-related know-how. It will also discuss design techniques and study items for cloud-native systems based on use cases to accumulate know-how on designing such systems.” In this way, we will continue to share knowledge and hold discussions with engineers within the NTT Group.

NTT Com makes a strong effort to develop software personnel with the aim of enhancing internal skills. As a part of this effort, we have established the NTT Tech Conference [5] to enable NTT Group engineers to share what they have been learning in their software activities on a voluntary basis. 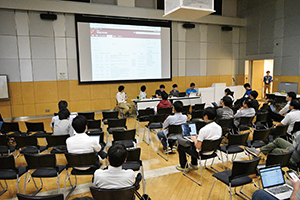 NTT Com plans to hold more meetings of the NTT Tech Conference in the future as a forum for exchanging information on OSS and other software technologies.

At NTT Com, we will continue to develop services using OpenStack and other OSS products with the aim of responding rapidly to user needs. We seek to contribute to the growth of the OSS community not only by using OSS but also by proposing and improving functions. At the same time, we will hold study groups and events to facilitate technology exchanges with engineers both inside and outside the NTT Group with the aim of strengthening the internal skills and technological competence of the entire NTT Group.

All brand names, product names, and company names that appear in this article are trademarks or registered trademarks of their respective owners.